Our Brain And Our Behavior, Part One

If you have ever watched a youth soccer game, you’ve seen it.  Basically, the players observe where everyone is headed (towards the ball), and follow suit.  It doesn’t matter where the ball is located on the field or what position the child is in–they’re going after it with all their might! While it’s cute to watch, this cluster of uniformed chaos creates a hive of activity and works against them, making it difficult to move down the field. 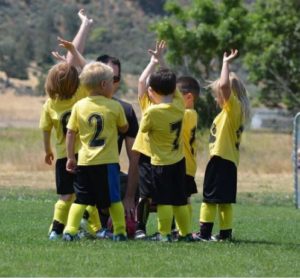 In soccer, this behavior becomes less of an issue over time as the player learns the sport.  In the world of personal finance, this type of behavior is referred to as herd mentality, a type of “behavioral bias”, and may not go away over time.  And unfortunately, your own behavioral biases are often the greatest threat to your financial well-being.

Why Do We Have Behavioral Biases?

Most of the behavioral biases that influence your investment decisions come from myriad mental shortcuts we depend on to think more efficiently and act more effectively in our busy lives. Usually (but not always!) these shortcuts work well for us. They can be powerful allies when we encounter physical threats that demand a reflexive reaction, or even when we’re simply trying to keep up with hundreds of decisions we make every day.

What Do They Do To Us?

As we’ll cover in our next few articles, those same survival-driven instincts that are otherwise so helpful can turn deadly when it comes to our financial decisions.  Even once you know biases are there, you’ll probably still experience them. It’s what your brain does with the chemically induced instincts that fire off in your head long before your higher functions kick in.

What Can We Do About Them?

In this multi-part article, “Our Brains And Our Behavior,” we’ll offer an introduction to investors’ most damaging behavioral biases, so you can more readily recognize and defend against them the next time they’re happening to you. There are a few additional ways you can defend against behavioral bias:

Have a solid plan – By anchoring your financial decisions in a carefully constructed plan (with predetermined asset allocations that reflect your personal goals and risk tolerances), you’ll stand a much better chance of overcoming the bias-driven distractions that test your resolve along the way.

Don’t go it alone – Just as you can’t see your face without the benefit of a mirror, your brain has a difficult time “seeing” its own biases. Having an objective advisor, dedicated to serving your highest financial interests, and unafraid to show you what you cannot see for yourself is among your strongest defenses against all of the biases we’ll present throughout the rest of this series.

With that introduction, let’s explore the first few biases:

What is it? As humans, we love to be right and hate to be wrong. This manifests as confirmation bias, which tricks us into being extra sympathetic to information that supports our beliefs and especially suspicious of – or even entirely blind to – conflicting evidence.

When is it helpful? When it’s working in our favor, confirmation bias helps us build on past experiences to more readily resolve new, similar challenges. Imagine if you otherwise had to approach each new piece of information with no opinion, mulling over every new idea from scratch. While you’d be a most open-minded person, you’d also be a most indecisive one.

When is it harmful? Once we believe something – such as an investment is a good/bad idea, or a market is about to tank or soar – we want to keep believing it. To remain convinced, we’ll tune out news that contradicts our beliefs and tune into that which favors them. We’ll discount facts that would change our mind, find false affirmation in random coincidences, and justify fallacies and mistaken assumptions that we would otherwise recognize as inappropriate. And we’ll do all this without even knowing it’s happening. Even stock analysts may be influenced by this bias.

What is it? Familiarity bias is another mental shortcut we use to more quickly trust (or more slowly reject) an object that is familiar to us.

When is it helpful? Do you cheer for your hometown team? Speak more openly with friends than strangers? Favor a job applicant who (all else being equal) has been recommended by one of your best employees? Congratulations, you’re making good use of familiarity bias.

When is it harmful? Considerable evidence tells us that a broad, globally diversified approach best enables us to capture expected market returns while managing the risks involved. Yet studies like this one have shown investors often instead overweight their allocations to familiar vs. foreign investments. We instinctively assume familiar holdings are safer or better, even though, clearly, we can’t all be correct at once. We also tend to be more comfortable than we should be bulking up on company stock in our retirement plan.

What is it? You know what fear is, but it may be less obvious how it works. As Jason Zweig describes in “Your Money & Your Brain,” if your brain perceives a threat, it spews chemicals like corticosterone that “flood your body with fear signals before you are consciously aware of being afraid.” Some suggest this isn’t really “fear,” since you don’t have time to think before you act. Call it what you will, this bias can heavily influence your next moves – for better or worse.

When is it helpful? Of course, there are times you probably should be afraid, with no time for reflection about a life-saving act. If you are reading this today, it strongly suggests you and your ancestors have made good use of these sorts of survival instincts many times over.

When is it harmful? Zweig and others have described how our brain reacts to a plummeting market in the same way it responds to a physical threat like a rattlesnake. While you may be well-served to leap before you look at a snake, doing the same with your investments can bite you. Also, our financial fears are often misplaced. We tend to overcompensate for more memorable risks (like a flash crash) while ignoring more subtle ones that can be just as harmful or much easier to prevent (like inflation, eroding your spending power over time).

What is it? Like fear, greed requires no formal introduction. In investing, the term usually refers to our tendency to (greedily) chase hot stocks, sectors or markets, hoping to score larger-than-life returns. In doing so, we ignore the oversized risks typically involved as well.

When is it helpful? In Oliver Stone’s Oscar-winning “Wall Street,” Gordon Gekko (based on the notorious real-life trader Ivan Boesky) makes a valid point … to a point, anyway: “[G]reed, for lack of a better word, is good. … Greed, in all of its forms; greed for life, for money, for love, knowledge has marked the upward surge of mankind.” In other words, there are times when a little greed – what we could call ambition – can inspire us to be better humans and to strive for greater achievements.

When is it harmful? In our cut-throat markets (where you’re up against the Boeskys of the world), greed and fear become a two-sided coin that you flip at your own peril. Heads or tails, both are accompanied by chemical responses to stimuli we’re unaware of and have no control over. Overindulging in either extreme leads to unnecessary trading at inopportune times.

Ready to learn more? In our next article, we’ll continue to introduce a few more of the most suspect financial behavioral biases.